Posted by Betsy Downard
Imagine my surprise when, reading about this video, I learned that it’s about unicorns. A little research provided me with this interesting stuff:
First verse is about unicorns. Unicorns are a symbol of Christ. The single horn signifies the unity of God and Jesus. Their small size: Christ’s humility in becoming human. Their fierceness: the inability of hell to hold Jesus. In medieval images they are often shown being killed, with a spear in the side. Only a maiden can capture them.
Second verse: hydrus. This creature lives in the Nile, and is an enemy of the crocodile. When the hydrus sees a sleeping crocodile it rolls itself in mud and leaps in the open mouth, and the croc swallows it alive. It then eats the croc’s innards and comes out the other side. Images show both ends of the creature: the tail coming from the croc’s mouth and the head poking out its belly. The crocodile symbolizes hell; the hydrus Christ. It is Jesus visiting hell and bursting from the tomb.
Third verse is about pelicans! Did you know the pelican is also a symbol of Christ? The legend is that the pelican sheds its own blood to feed and revive its young. In some versions the young have perished and the blood brings them back to life. Jesus’ blood revives us.
Between each verse “Alleluia to the dying Lamb; Alleluia to the victorious Lion.” What an Easter text!
Add to that a really cool table portative played by one of my favorite medieval music specialists, Catalina Vicens, and the calcant is an amazing singer. What a beautiful surprise! I hope you enjoy it as much as I am.
https://www.youtube.com/watch?v=WJ_FC97V4qk
Added bonus: the Medieval Bestiary. http://bestiary.ca/index.html
Peace. C 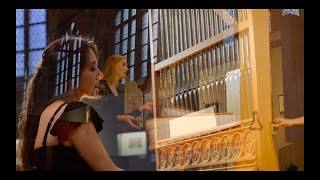 Join Us for Worship

Have you filled out your 2021 Pledge yet? You can do it online here!

Registration links for all of these available to the left.

Subscribe to our Sermon Podcast
Available on Google Play, Stitcher, and iTunes.